A smart air purifier to combat the pollen season: Just in time for allergy season, Jya launches the Fjord Pro Air Purifier, a powerful air purifier. The device, which costs just under 500 euros, not only filters pollen, dust, and volatile organic compounds (VOCs) from the air but even connects to your smartphone. Find out why this is useful in our hands-on test. 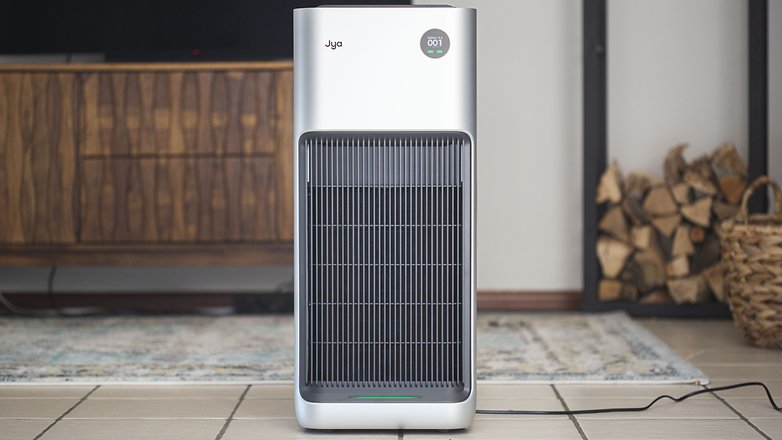 Who or what is Jya anyway?

Jya is a brand of Smartmi and thus part of the Xiaomi ecosystem. Founded in 2014, Smartmi specializes in home climate and includes fans, electric heaters, humidifiers, and even air purifiers in the consumer sector. Jya, on the other hand, deals exclusively with air filters in the upper price range. In addition to the Fjord Pro Air Purifier tested here, Jya also offers the "normal" Fjord Air Purifier, which is quite a bit cheaper at 399 Euros.

If your eyes are already burning, you can save until March 14 at 9:00 CET at Jya - both the Jya Fjord Pro and the "small" Jya Fjord are currently 40 euros cheaper in the Early Bird offer. By the way, Jya ships the air filters from a warehouse in Europe. The shipping shouldn't take too long, and you're on the safe side regarding customs duties. The brand currently doesn't have a US store.

Disclaimer: This hands-on is part of a cooperation between Nextpit and Jya. The manufacturer had no influence on the editorial opinion in this review.

Even before unboxing, one notices: "Wow, this thing is huge!" With a footprint of 31 by 30 centimeters and a height of 72 centimeters (12.2 x 11.8 x 28.3 inches), the Jya Fjord Pro Air Purifier is already a real piece of furniture. The design in black and silver is simple and fits easily into modern living spaces. And if you want to customize its looks, you can cover the silver plastic elements with furniture foil. The power switch is located at the bottom of the device's back - and off you go!

In the upper right corner of the front, Jya installs a circular OLED touchscreen. In the standard view, the air filter always displays the fine dust measurement value (PM2.5) in µg/m3 here. Below that, you can see the words "pollen" and "TVOC", i.e. for allergens, and "total volatile organic compounds", i.e. volatile (gaseous) organic compounds, highlighted in color. The color indicates how good or bad the measured values are. With a swipe to the left you can see the status of the PM10 fine dust particles in four gradations. PM2.5 and PM10 include pollen, dust, pet dander,  and bacteria, for example. 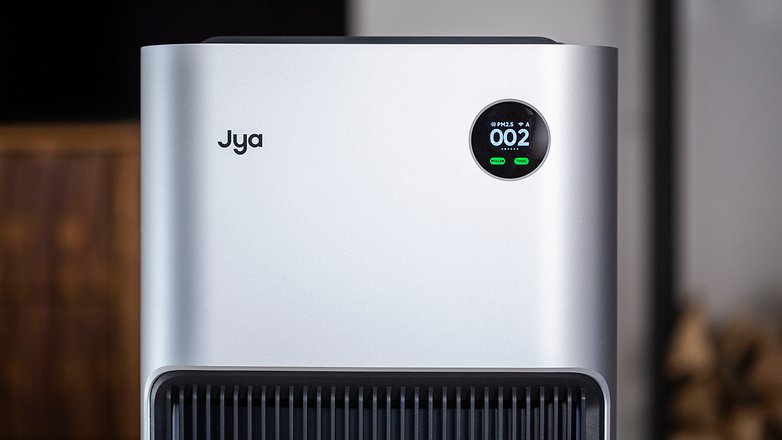 Swiping to the right from the home screen takes you to the ventilation grille setting on the top. You can set the angle to 30, 60 or 90 degrees. Further to the right are settings for the display brightness and Wi-Fi connection as well as the filter's state. Last but not least, you can switch the operating mode between "Active", "Night" and "Automatic" by tapping the home screen. The more active, the more effective the filter effect, but the louder the device is - although the noise level is still tolerable even on maximum level (manufacturer's specification: maximum 64 dB(A), 18.8 dB(A) in sleep mode).

A wide LED below the large ventilation grille on the front shows you a summary of the current measured values, from green for "super" to dark red for "bad". In the following picture, it lights up red because the air filter is missing. 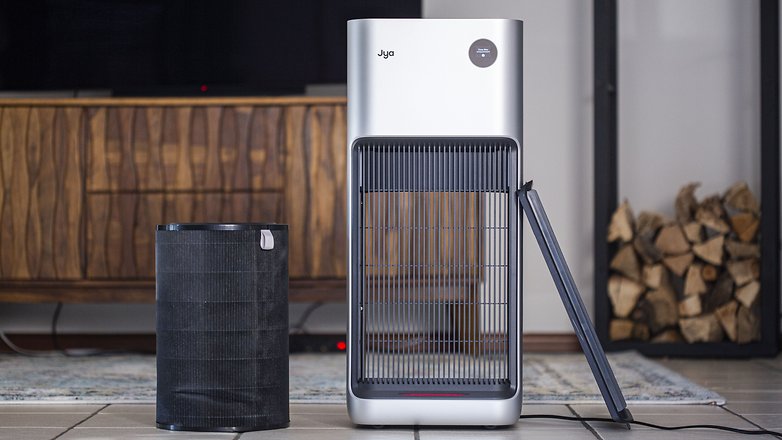 On the back of the case are a large and a small flap. Behind the large flap is the huge air filter - it's immediately clear why Jya builds the air purifier so large. The air filter lasts for about 300 days, the app informs you about the wear. At 79 Euros, a replacement filter is not exactly cheap, but on the other hand, better breathing air is worth the money. The sensors of the Fjord Pro Air Purifier are hidden behind the small flap - but more about that later. 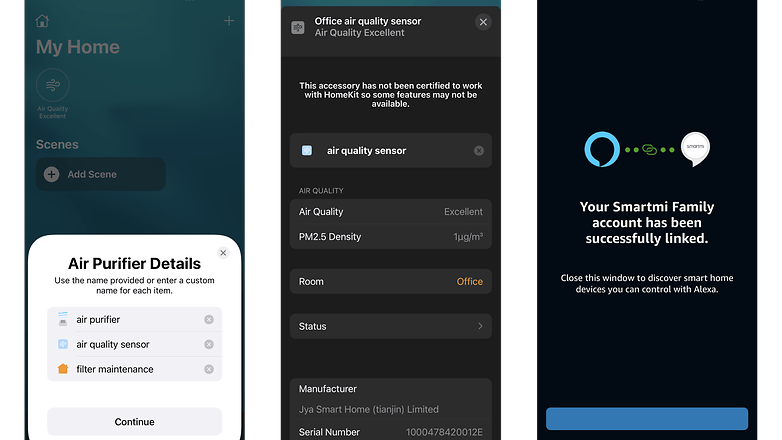 The air purifier not only works with the manufacturer's own app, but also with Apple Homekit (left, center) and, via a corresponding skill, with Amazon Alexa (right) / © NextPit

The only downer at this point: Unfortunately, you can't currently use the Jya air filters with the Xiaomi Home app, but you can with Apple HomeKit, Alexa, and Google Assistant. Connecting with Apple Homekit was no problem in the test. The Fjord Pro Air Purifier was automatically detected with the iPhone on the same Wi-Fi network. I only had to search a bit for the eight-digit code under the air filter flap. Once connected, you can see the most important key data of the air purifier in your Apple Home overview.

But now to the manufacturer's app: 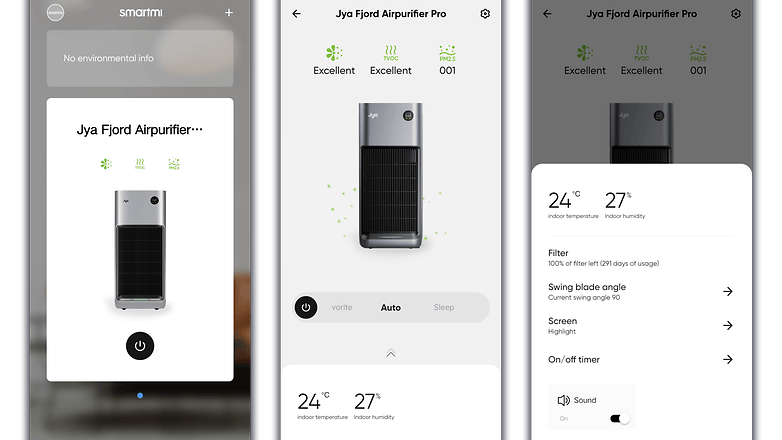 This is what the Smartmi Link app from the manufacturer looks like. A click on the three icons above the device image (center) leads you to a history of the measured values, see next picture / © NextPit

In the Smartmi Link app, you can find the most important data at a glance. Above the product image you can see the status of the PM10 and TVOC readings in four levels (super, good, medium, bad) as well as the PM2.5 reading in µg/m3. At the bottom of the screen, the app also shows you the room temperature and humidity. While there is a history log of the measured values for particulate matter and TVOC, this is unfortunately missing for temperature and humidity. 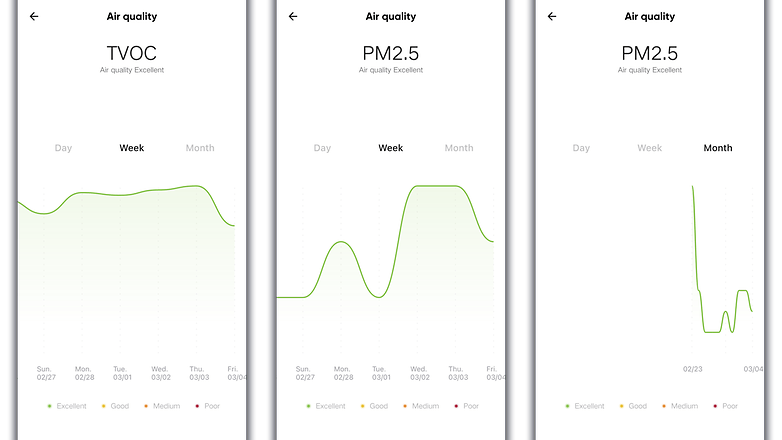 Unfortunately, the Y-axis does not have a label for the different measured values. More details would have been interesting here. In the screenshot on the right, you can see how the air purifier reduced the dust load after startup / © NextPit

You can also turn the Fjord Pro Air Purifier on and off in the app, as well as switch between the different fan modes. As on the OLED touchscreen, there are also settings for the angle of the ventilation grill and the display brightness - the display can also be turned off completely for the bedroom. You'll also find a wear indicator for the filter in the app.

Two options are exclusive to the app: First, you can turn the sound effects for the air purifier on and off. Secondly, there is a timer function so that the Jya Fjord Pro Air Purifier only runs at certain times of the day or on certain days.

Practice: Filter performance to the test

The technical specifications of the Jya Fjord Pro Air Purifier are impressive. According to the manufacturer, the air purifier is suitable for rooms up to 710 ft² (66 m²) in size, and the "Clean Air Delivery Rate" (CADR) is said to be 550 cubic meters per hour for fine dust-polluted air. The binding of volatile hydrocarbons runs a little slower; here the air purifier comes to 250 cubic meters of clean air per hour. In addition, the manufacturer promises that the NanoGuard filter is at HEPA H13 level - and thus filters 99.99% of 0.1-micron particles from the air - i.e. germs, viruses, bacteria & Co. 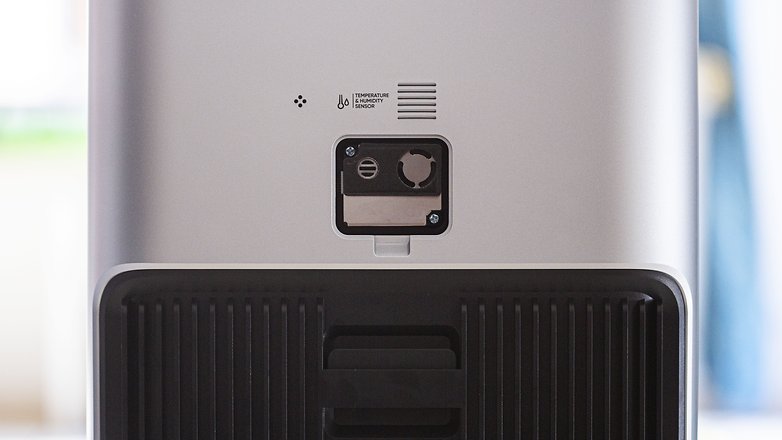 Admittedly: In the absence of a spectrometer, it is difficult for us to judge the actual filter performance of the Jya Fjord Pro Air Purifier. However, I am allergic to early bloomers and have noticed a noticeable improvement in my allergy symptoms since using the air purifier in my home office - and the air quality in the neighboring bedroom has apparently profited as well. The Fexofenadin remains in the drawer, at least for now. 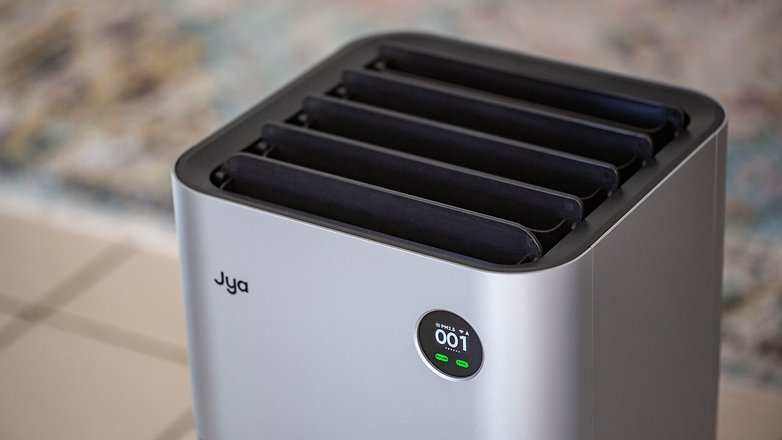 Even though Jya is still a new brand, the experience of the parent company is noticeable: In terms of smart features, the device functions flawlessly and works with Apple HomeKit, Google Assistant, and Amazon Alexa. It is just a pity that the Xiaomi Home app cannot currently be used despite the relationship.

The filtering capabilities are impressive on paper - and at least with regard to my early bloomer allergy, I could notice an improvement after a short time. As for the capabilities in terms of filtering out TVOCs and non-allergenic particulate matter, we unfortunately cannot make any statements due to the lack of a spectrometer.

What I found interesting in the test, however, were the readings from the air purifier over time. This is a good chance to learn something about the pollen, dust, or chemical load in the air, for example after airing or after using cleaning agents. However, I would like to see more detailed statistics here.